I am pleased to announce this new award.  This will be an ongoing event, presented to those who have shown Outstanding contributions over the years to this our association. 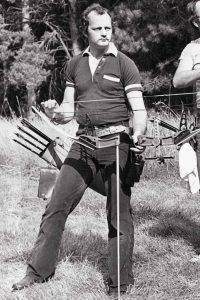 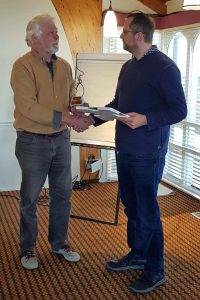 I have had the privilege of Knowing Chris for many years. He was always a lover of this our chosen sport. For those of you with a good memory (I will find those photos) Chris was known to shoot with a top hat. One of my favourite bows that I got from Chris is hanging in the Merlin shop. Chris was and is a legend in the archery community of the world, and a primary contributor to the spread of the compound bow within Europe. A bowyer whose bows have taken EFAA archers to the highest levels and have been winning World and European Championships as recently as this year Chris had his fair share of success within the  EFAA and IFAA championships and records. The only archery association that was consistently a member of for over 40 years, was the EFAA.

In the last two years Chris was able to full fill a lifelong dream to set up a club and and course, the first new 28 target course to be set up for many years. The whole site which was enjoyed by so many of you at this years National Championships, was to his design, from the club house and the tree stand, to the metal pegs and double thick bosses. To continue his life as an EFAA archer he managed to shoot a couple of new National records on his new Course.

We have had several members proposed to us this year for this award, making it hard to decide. But after looking into the chosen one's history a decision has been made. Many years of dedicated work starting back in the 70's, then becoming a member of our committee in 1985 serving in several positions including our international Representative and over the last few years as out Vice President.

So it is with pleasure that I present this award to.

All the very best to you.